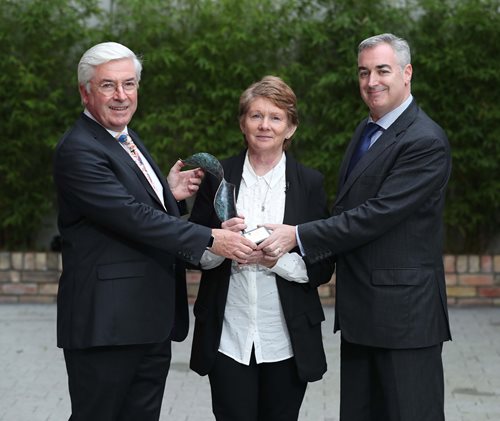 26/10/2017 - Catherine Corless was speaking in Dublin on Thursday where she was presented with the annual Human Rights Award from barristers’ organisation the Bar of Ireland, for her work in relation to the Tuam Mother & Baby Home.  Following the ceremony Catherine said she was “truly honoured” to receive the award.

She said: “I’m not used to public speaking. I think this is my third speech total. However, I feel it is important to keep making these addresses so that we might garner the attention needed to see justice done for the survivors of the Tuam home and many other homes like it.”“My work campaigning on behalf of the survivors of mother and baby homes continues and I hope that this special award will give even more survivors the strength to come forward to tell their story,” she said.

“With each and every testimony the truth is uncovered further and our campaign for justice to prevail is strengthened.

“I share this award with the all survivors, this is for them.”

She called for the exhumation of the bodies of all children buried at the mother and baby home in Tuam, Co Galway.

Her research led to the discovery of the remains of hundreds of babies on the site of the former institution for unmarried mothers run by the Sisters of the Bon Secours, and she continues to advocate on behalf of survivors.

A “terrible injustice” had been done to “innocent children” at the home she said, “both the people who went through the home and survived it and also the children who died there” .

“I couldn’t get my mind around how the sisters could leave that home in 1961, close the gates when it closed down, with 796 children buried beneath in the tunnels, a lot of them in the sewage tank area as we now know,” she said. “What kind of mentality would leave that place without acknowledging that so many burials were there, so many precious lives were lost?”

In her speech, she took aim at the present administration of the Catholic Church in Ireland, who she said have failed to display adequate understanding and support to the survivors of the Tuam home.  In particular, she criticised the refusal of Church officials to meet with survivors until after the government’s Commission of Inquiry has published its final report, which is expected to be released early in 2018.

She said she hoped the commission would make recommendations which would restore some dignity to the dead.

“The ideal would be to exhume those little bodies and just show them some dignity and reverence and to perhaps reinter them in the main Tuam graveyard which is only across the road.”

The Chairman of the Council of The Bar of Ireland, Paul McGarry SC, said she had shown, “incredible courage and determination in her advocacy work on behalf of the survivors.”

“She has worked tirelessly on their behalf and has shone a light on a dark period of our history, passionately represented the victims and their rights at all times, often in the face of adversity.

Thomas Creed SC, chair of The Bar of Ireland’s Human Rights Committee said Ms Corless was a “fearless campaigner for human rights” adding that she had “done both the survivors and wider society a great service.”